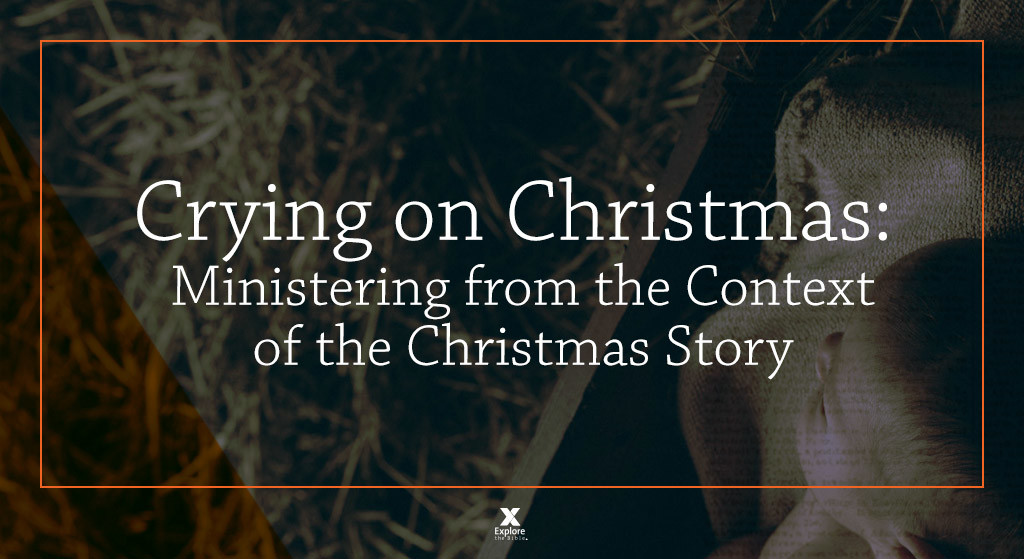 We have a stocking labeled “Aiden” that hangs from our fireplace. There will not be any candy or any of those cool little gifts put in it. Rather, it hangs in memory of our boy. We could not bring ourselves to leave his stocking in storage while hanging Austin’s, Asher’s, and Asa’s. We can’t win. If we put his stocking away, it would be devastating; like pretending he is not part of our family. If we leave it hanging over the fireplace, it is a reminder of our grief. However, I have an idea for a new tradition this year that may change the way we see that little embroidered snowman on Aiden’s unused stocking.

The expectation that Christmas would be a happy time is precisely what makes it so difficult and depressing for many who suffer from grief and depression. Juxtaposing the idyllic joy of the season with the crushing realities of one’s sadness around Christmas reveals a stark contrast. “I am saddest precisely when I am expected to be happy and that fact makes me even sadder.” When faced with pointed grief in the holiday season, you and the people with whom you share God’s Word have the freedom to simply allow people to overwhelm you, but there is a better way. I invite you to hand your grief over to God and allow Him to use it as a platform upon which to build a gospel testimony. Allow Him to use your grief to better teach you the context of the Christmas story.

You see, the original figures who lived to see firsthand the years surrounding the first Christmas saw it as a mixture of pain and glory. It was a time of political upheaval, war, and mass slaughter of young boys. Here is a passage from Matthew’s Gospel that, understandably, is not recounted in Christmas carols:

Then Herod, when he saw that he had been outwitted by the wise men, flew into a rage. He gave orders to massacre all the male children in and around Bethlehem who were two years old and under, in keeping with the time he had learned from the wise men. Then what was spoken through Jeremiah the prophet was fulfilled: “A voice was heard in Ramah, weeping, and great mourning, Rachel weeping for her children; and she refused to be consoled because they were no more.”

The Lord works all things together for the good of those who love Him and are called according to His purpose (Rom. 8:28). This certainly does not mean that all things are good. It means that God can take even the worst things in our lives to achieve beautiful good that could not have otherwise come about. If you or someone in your group is crying this Christmas, show these 4 parallels between your personal contexts and the context of the original Christmas.

If you or a member of your group just wonders where God is in the midst of this current pain, show them the faith of the Magi. They may not have even have been believers yet, but they saw God amidst His silence. For generations, believers fixed their eyes to the horizon – convinced that the Lord would fulfill the promises He had made to their great grandfathers’ generation. At last, their faith was vindicated in a manger in Bethlehem. Think on the faith of those who knew that God would do as He said He would despite centuries of what could be considered evidence to the contrary. Like those generations of believers who waited for the Messiah’s arrival, we eagerly await His return. Silence from God is an opportunity to show faith in Him.

The words of Matthew 2:18 are a quotation of Jeremiah 31:15. “A voice was heard in Ramah, weeping, and great mourning, Rachel weeping for her children; and she refused to be consoled because they were no more.” This is one of those many Old Testament passages with a profound duality. It was spoken first to God’s people by the prophet Jeremiah centuries before the first Christmas and applies both to the people of Judah in Jeremiah’s day and to the residents of Bethlehem in Herod’s day. There were roughly 20 little boys of the age Herod stipulated should be slaughtered in Bethlehem. Some interpret Revelation 12:4 in light of this – believing Herod to be acting on Satan’s (the dragon’s) behalf in a futile attempt to sabotage the life of the young Messiah.

3. It was a time of political unrest.

Even those who are not suffering from a particular source of pain such as depression or grief can relate to this parallel. There was great tension between the Jewish authorities and the Roman authorities. In a misinterpretation of Messianic prophecy, many Hebrew people expected the Messiah to act as a political leader who would oust the Romans and fully restore Jewish reign over Israel. The background to Herod’s coronation has roots in the dispute among the Jews as to whether or not the descendants of the Maccabees (the Hasmonean dynasty) had any right to exercise authority over Jewish people. The argument as to whether or not the Hasmoneans were descendants from the duly appointed Levites gave rise to the diverging offices of Sadducee and Pharisee. To quell this schism left behind by the Seleucids after Antiochus IV Ephiphanes’ death, and to capitalize on the opportunity, the Romans appointed Herod (an Edomite) to the throne. So, suffice it to say that an air of political tension is something we have in common with the original observers of the Christmas story.

Satan hates life. He hates children. He hates Christmas. So, he particularly hates the lives of children at Christmas time. It reminds him of his utter defeat in his attempt to sabotage Christ’s birth. Herod did everything he could, but he could not stop the true King. God won in the original Christmas story and He can reign victorious in our sufferings today. If you or someone in your group needs some words of hope, pass on to them a prophecy of God’s ultimate will and plan as found in Revelation 21:4:

He will wipe away every tear form their eyes. Death will no longer exist; grief, crying, and pain will exist no longer, because the previous things have passed away.

So, like the wise men, bring offering fit for a King before Jesus this Christmas. Bring Him gold. Remember that He was born to die. Bring Him frankincense. Remember that He would face suffering. Bring Him myrrh; an aromatic resin that releases a beautiful fragrance when it is crushed. Worship Him in the midst of the unrest and the silence; the anguish and the joy. Know that He is good and resolve to arrive on the distant shore across your suffering with your testimony of faith intact.

I think that, this year, we will write prayers to God thanking Him for our time with Aiden and put those in Aiden’s stocking. Then, it will not be empty anymore.