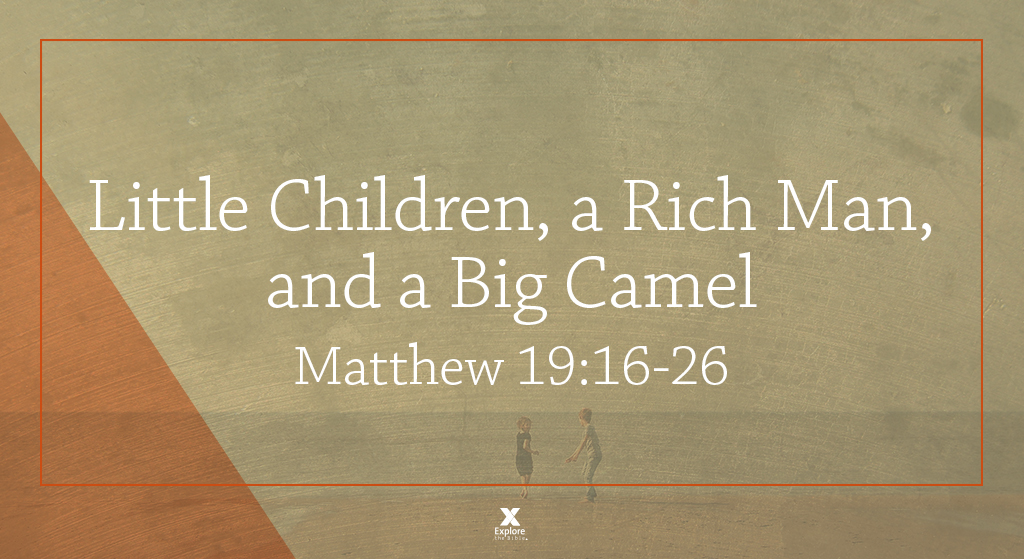 First, little children were brought to Jesus, presumably by their parents, so that He might bless them (v. 13). For unexplained reasons, Jesus’ disciples rebuked the parents. Either the disciples thought Jesus had more important concerns than to be bothered by little children, or they resented this intrusion into their private time with Jesus.

How quickly they had forgotten. Only a few days earlier, Jesus had called a child to Him, stood him before the disciples, and announced, “whoever humbles himself like this child—this one is the greatest in the kingdom of heaven. And whoever welcomes one child like this in my name welcomes me” (18:3-4). This was in response to their question about who was the greatest in the kingdom. Apparently, they spent a lot of time comparing themselves to one another (see Luke 9:46; 22:46).

“Leave the children alone,” Jesus told them, “because the kingdom of heaven is made up of people like this” (Matt. 19:14). Mark and Luke add Jesus’ teaching that no one can enter the kingdom unless they become like a little child (Mark 10:15; Luke 18:17).

A rich man enters the story, asking Jesus what he needed to do to have eternal life (Matt. 19:16). He thought he had to “do” something to earn eternal life. Yet in spite of his best efforts to keep the commandments, this person perceived something was lacking in his life (v. 20). Knowing the man’s heart, Jesus told him to go, sell his possessions, “then come, follow me” (v. 21).

With this, Jesus got to the heart of the rich man’s problem; it was a problem of the heart. It’s important to note that Jesus’ demand that the rich man give away his possessions cannot be detached from His call to come and follow Him: “sell … give … come, follow me.” It would not be in the giving away of his possessions (a good deed) that the rich man would find life, but rather in loving Jesus so much that he would be willingly give up everything to follow Him. But he was not willing. Whatever stands in our way of following Jesus, His demand is the same: give it up.

At this point, Jesus turned to His disciples. Here was a teaching moment. “It is easier for a camel to go through the eye of a needle than for a rich person to enter the kingdom of God.”

The disciples were astonished at this because in that day wealth was considered a sign of God’s blessing. Thus, their question in verse 25: “Then who can be saved?” What the rich man called “eternal life” (v. 16) and Jesus called “the kingdom” (v. 24), the disciples called being “saved.”

Jesus’ answer in verse 26 is the enormously significant point that links little children, a rich man, and a big camel. We can no more save ourselves than a camel can pass through the eye of a needle. Salvation is not about our doing, but what God has done. It is not about achieving or earning; it is about receiving. Therefore, we come to God as a little child—helplessly dependent, humbly trusting, open to receive, willing to obey.

How could you use this passage to share with a person who thinks he must earn his way to God?