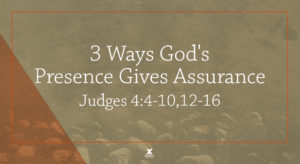 Prior to leading the army down Mount Tabor to take on Sisera and his 900 iron chariots, Barak was reminded by Deborah that God had gone before them. She assured Barak of God’s presence while he obediently faced a foe of God and His people. God’s presence gave Barak confidence to act.

One question suggested to facilitate discussion about Judges 4:12-14 in the group time this week is: How does the assurance of God’s presence give a believer confidence?

Most of us would rather go somewhere with another person. We may want to share the experience, need encouragement to finish the task, or need assistance. In some cases, we may just need someone to keep us company on the journey. But God’s presence goes beyond companionship. His presence is about His character. There are at least three ways God’s presence provides confidence.

Confidence gained through His work. Deborah compared God to a king going before the army into battle. God had already been at work, and Barak was being asked to simply get in on what God was already doing. In most cases, the hardest step is the first one–starting the action. God’s presence means we are not starting the action, but instead, we are joining Him in what He is already doing.

Confidence gained in His power. Barak was facing an army of chariots larger than the force sent by Pharaoh, who eventually drown in the Red Sea (see Ex. 14:5-7). In human terms, the odds were stacked against him. However, Barak was not doing battle in his power or the power of the army he led. God supplied the power for the fight. God’s power can not be separated from His presence. God’s presence empowers us to confidently complete the tasks He assigns.

Confidence gained from His direction. God had directed Deborah and Barak, even telling them where to battle would occur (Kishon River, Judg. 4:7). God’s presence means we are not making the strategic decisions alone. He is there to give us counsel and direction, giving us confidence for the next step.

In what other ways does God’s presence give us confidence to attempt and complete a God-given assignment?