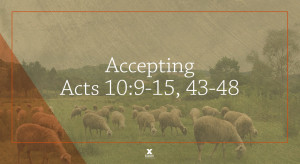 Some lessons in life are harder than others. The hardest lessons seem to be the ones that cause us to question our upbringing and heritage. Peter had been taught his whole life that he was a part of God’s chosen people. He was, but he understood God’s chosen in terms of a family tree. God was about to remind Peter of the inclusive nature of His salvation.

Peter was hungry, sleeping as a meal was being prepared. In a vision, God directed Peter to eat animals forbidden by Jewish law. Peter had never tasted bacon, pulled pork, or fried catfish! God had to tell him three times it was okay to eat the food God provided even though it was on the forbidden list. The point of the vision was not about diet, but about people. God had revealed to Peter that all humans were of value and in need of salvation. God was also teaching Peter that the offer of salvation was to anyone willing to follow Jesus. ANYONE!

The Bible Skill activity for this session encourages us to look at an event where Peter once again had to be reminded that salvation is offered to anyone (Gal. 2:11-16). This time, God used Paul to remind Peter of this important truth. Peter needing to be reminded which may be one reason he stated in his second letter that he would always remind his readers of the basics of the gospel (2 Pet. 1:12-15).

Who is your “them” and what actions are you taking to make sure “they” hear the gospel?