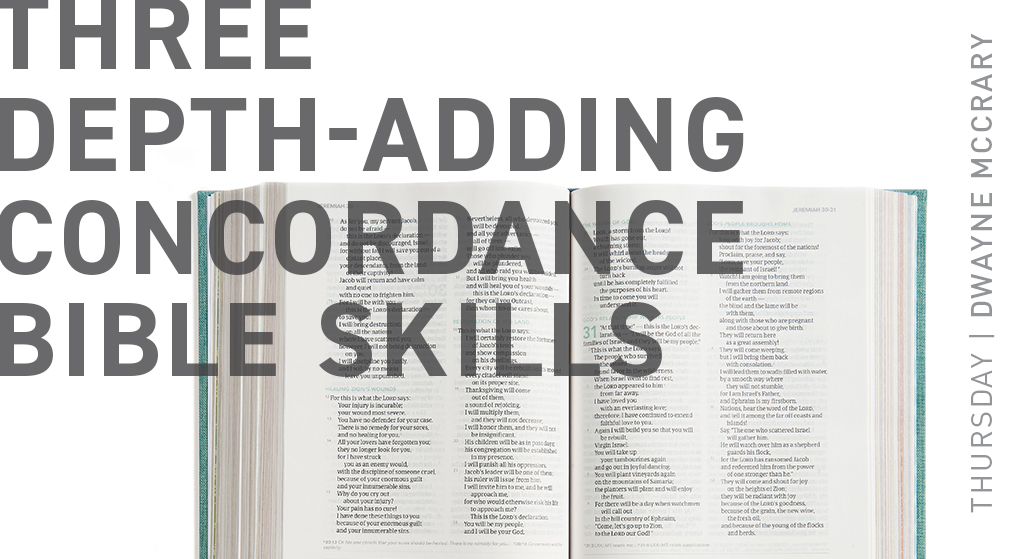 A concordance indexes the words in a literary work. The first Bible concordance was created by Alexander Crudin and was based on the Authorized Version (what we call the King James). He listed the English word and then every reference where that word appeared. The first edition was printed in 1737. More than 100 years later, Robert Young introduced the first multilingual concordance, indexing the English, Greek, and Hebrew. First published in 1879, Young’s concordance was organized by the English word with the Hebrew and Greek words and Bible references listed under each English word. In 1890, James Strong introduced a new concordance that set a new standard. In this concordance, Strong listed each English word in the KJV and then the Greek or Hebrew root word. He assigned each Hebrew and Greek root word a number, distinguishing between the two languages using an H or a G at the beginning of the number. This number system continues to be used today. All three of these concordances are in print today, each being revised over the years.

We can pull up a PDF or DOC file on our computer and use the search tool to find the occurrence of a word, but they did not have that luxury. Their work was done with pen and paper and a multitude of handwritten notes. Those organized notes make it possible for us to dig deeper into the Bible text. Here are three ways of using a concordance to add depth to our Bible study.

Same word used by the same author. One way to use a Bible concordance is to examine words used but the same author. Some authors wrote only one Bible book but others wrote more than one (Moses, Ezra?, Solomon, Jeremiah, Luke, Paul, Peter, John). To show how this can work, most scholars believe Paul wrote Philippians, Ephesians, Colossians, and Philemon while in house arrest in Rome. In the book of Philemon, we find Paul making a play on words using the name of Onesimus which means useful. In verse 11 we find Paul explaining that Onesimus (useful) was useless to Philemon but was now useful to both Paul and Philemon. Of note is Paul’s use of the same Greek word to describe Mark in 2 Timothy 4:11 (NIV uses helpful and KJV uses profitable). Remember this is the same Mark that Paul refused to allow on his second missionary journey which led to the conflict between Paul and Barnabas (see Acts 15:36-41). Mark is identified as being with Paul when under house arrest (Col. 4:10-11, Philem. 24). In short, Paul now saw Mark as useful and was asking Philemon to do the same with Onesimus. The use of the Greek word translated useful in these two letters was not a coincidence.

Same word used by different authors. Another approach is looking for ways the same word is used by different writers. Let’s go back to the conflict between Paul and Barnabas found in Acts 15. In Acts 15:39, Luke described the conflict as a “sharp disagreement” (CSB). The word used by Luke  appears in the New Testament only one other time. In Hebrews 10:24, the writer of Hebrews (unknown) used the term in a positive way; to provoke someone to action as in encouraging them to do the right thing. If we look outside of the Bible, we find the Greek term used in these passages in medical circles to describe when a disease of some type takes a turn for the worse, becoming full-blown. This “provoking” or “sharp disagreement” was equal to a virus taking over the body with a vengeance. We don’t know who wrote Hebrews, but we do know Luke wrote Acts and he was a medical doctor so we should not be surprised to find him defining a conflict as a full-blown virus.

Different words translated as the same English word. As is true with almost any language, something gets lost in the translation. One language may be more precise at one point while the other may be more precise at other points. Several examples exist of different Hebrew and Greek words translated as the same English word. Love is the most common example with the Greek using several different words to define love while the English language has only one word for those multiple words. Another example is the English word “time.” The Greek word chronos carries the idea of a specific amount of time as in a moment, an hour, or a season. The other Greek word, kairos, carries the idea of a decisive moment in time or at the proper or appointed time. In Acts 1:7 and 1 Thessalonians 5:1, both words are used in the plural. In the Acts passage, Jesus responded to the question about when Christ would return by telling the disciples that they were not “to know times (chronos) or periods (kairos)”. The CSB translates this same combination in 1 Thessalonians as “the times and the seasons”. A place where which Greek word was used matters is Mark 1:15 where we are told that the time (kairos) is fulfilled (the time has come, NIV).

We can be grateful for the work done by men like Cruden, Young, and Strong who paved the way for us to examine the English translation more carefully and enjoy the richness of the Hebrew and Greek languages without being a scholar or fluent in either.

Preview studies in Explore the Bible and see how Bible skills are featured. Preview here.