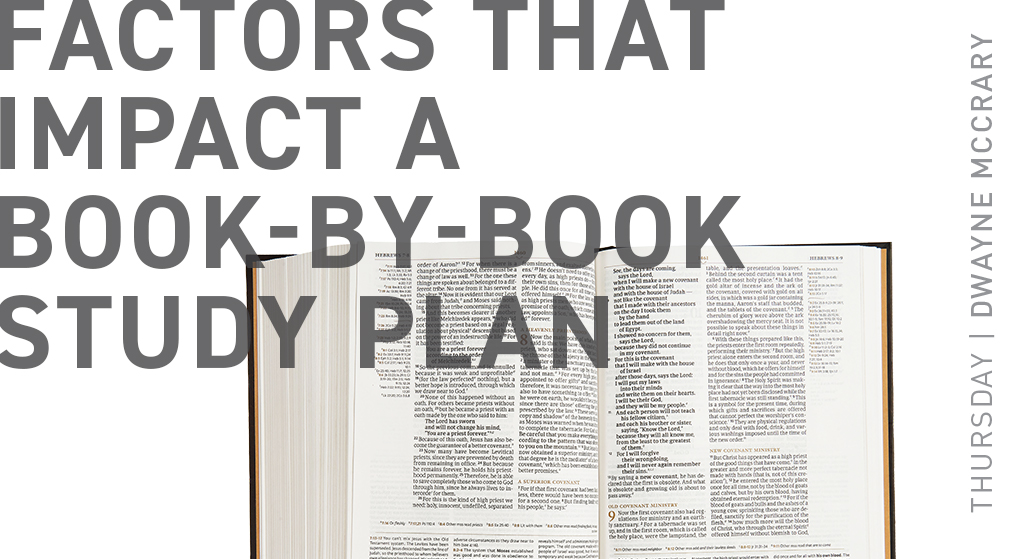 As we move toward the end of the current study plan (Summer 2023), we are beginning to hear requests for the next iteration of the plan. Work began on the plan nearly two years ago in anticipation of people wondering about what is next. Frankly, we wanted to know what was next as well! Several have asked about the factors that impact the creation of a plan, which leads to what you are about to read.

One challenge of creating a plan that touches every Bible book is designing something that is doable and realistic but also fair to each Bible book. Most people can read through the Bible in roughly seventy-two hours, depending on the translation. Our goal is more than just reading; we want people to study, examine, reflect, and act upon the truths they discover. For most of us, studying 15 verses is about all we can study in a group setting in an hour and do justice to the passage.

Some may wonder why we do not focus on a chapter a week. That sounds reasonable, until we do the math. The Bible contains 1,189 chapters. At a chapter a week, we would study through the Bible in twenty-two years and ten months. We would spend almost three years in the Book of Psalms alone. Many of us need something shorter than that. That brings us to the first factor.

Factor one: duration of the study. Everything else hinges on this decision. Fall 2023 will mark the beginning of our sixth journey through the Bible books. The longest duration was eleven years, and the shortest was eight. The other three plans lasted nine years.

Factor two: lessons. By lessons, we are talking about the main point of a Bible passage. The challenge is finding the balance between doable, realistic, and fair to a specific Bible book. Repeating the same main point every week can be a burden for many Sunday School teachers, especially since the majority are volunteers.

For example, Isaiah 13–23 (roughly a sixth of the book) talks about judgment coming on the nations. 13 different nations are identified with a pronouncement given about each. The message is the same for all 13: God exacts judgement on sin. Each of these nations sinned differently, but the main point continues to be expressed. So, in these 11 chapters, we find only one lesson. We must go into the designing of a scope and sequence with this type of awareness.

Factor three: for open groups. By design, Sunday School is for anyone. People can join a group at any time. They may not have any prior knowledge of the Bible, and it is unrealistic to expect them to catch up, especially if they join us beyond the first couple of quarters. We can assume they are at least interested in studying the Bible even if they have other reasons for attending.

Since Jesus is central, it makes sense that the Gospels are spread throughout the plan so that His life is studied every two to three years. We ought to be reaching out to people and incorporating them into our groups! Having an ongoing plan that takes into account the past plan just completed helps address this, knowing that people can “catch up” in the next cycle of study.

Factor four: attendance patterns. We cannot always predict what days will be the highest attended and lowest attended since factors like the weather and viruses are beyond our control, but we can be aware of general historical patterns. If we know when the most guests tend to attend or which months or quarters have the highest attendance in general, we can weigh those months or quarters within that plan. If we know October is the month we tend to see more guests than in other months, we will want to make sure to study a Bible book that gives more natural opportunities for sharing Jesus. Knowing this information reminds us of the importance of reporting accurate attendance records.

Other factors may be considered, but these are the big four. These factors highlight the complexity of creating a study plan that touches all the Bible books in a doable yet fair manner. No plan is perfect, but we can rest knowing that the study of God’s Word always produces fruit.

You can find the current Explore the Bible study plans here. For Students and Adults / for Kids.