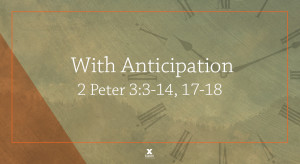 Peter reminded his readers that Jesus’ return would happen like a theft. Both Matthew and Luke record Jesus’ using the same image of a thief to describe His return (Matt. 24:43-44; Luke 12:39). Anyone who has been robbed can relate to this image. We would have done some things differently had we only known: placing items in the trunk, walking down a lighted street, keeping our valuables in a safety deposit box or safe. We would do something to be better prepared, and that was the point Peter was making here.

Jesus used other images to communicate the nature of His return. He talked of a vineyard owner who left servants in charge. The servants eventually killed the owner’s son when an accounting was called for at harvest time. This story ended with Jesus’ asking what should happen to these servants (see Mark 12:1-12). He also told of a businessman who went on a journey. The man gave three servants different amounts of money to watch while he was gone. Two doubled what they received, while the third buried his money. When the businessman returned, he called for an accounting of what the servants did with what he gave them (see Matt. 25:14-30). Jesus also compared His return to a returning bridegroom (Matt. 25:1-13), to a wedding party to which everyone was invited (Matt. 22:1-14), and to a blooming fig tree (Matt. 24:32-35).

In each of these illustrations, there is some type of anticipation. The vineyard owner anticipated a harvest. The two faithful servants anticipated that the businessman on the journey would hold them accountable for their actions. The bridesmaids anticipated a wedding to attend. The guests looked forward to the big wedding day. The blooming fig tree anticipated the day figs could be gathered. Anticipation can be seen in all of these images.

How do these images give you a deeper understanding of the anticipation we should have for the return of Jesus?

What other images in Scripture help you gain insight into the return of Jesus?