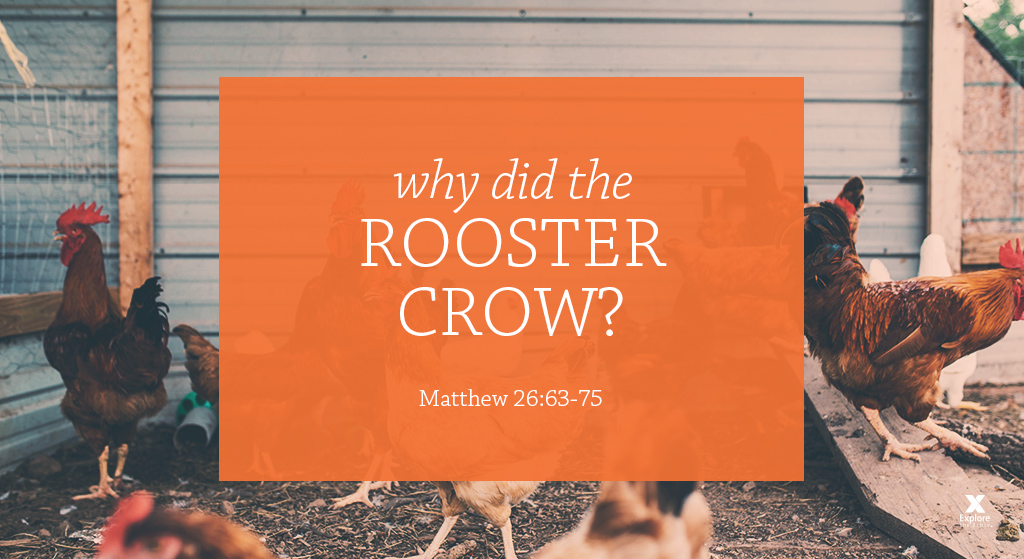 I grew up on a farm. We always had a few hunting dogs and occasionally tolerated a stray cat or two living in the barn for rodent control. We raised cows and at times had several horses.

But we never raised chickens.

One of our nearest neighbors did, though. Consequently, many mornings I was awakened not by an alarm clock or by Mom’s gentle voice but rather by an unwelcome, dawn-piercing cry of a rooster crowing. That fowl wake-up call was part of the natural symphony of sounds in rural life.

Have you ever wondered why roosters crow? It turns out they do so for a variety of reasons—and not just at the crack of dawn. Dominant roosters crow to assert the pecking order over hens and would-be rivals. They also crow to warn of predators around the hen house. They even crow in happy excitement during courtship rituals.

None of these reasons, however, gets close to describing the impact that a rooster’s crowing had on Simon Peter in the pre-dawn hours of Jesus’ crucifixion day. Matthew 26:75 states that after Peter heard a rooster crowing, he “remembered the words Jesus had spoken, ‘Before the rooster crows, you will deny me three times.’ And he went outside and wept bitterly.” Peter wept bitterly because he was confronted with an awful truth. In fear, he had denied being a follower of Christ not once, not twice, but three times—just as Jesus had predicted he would do.

There are some good lessons that we as believers can take from the episode of Peter’s failure of loyalty. First, Jesus knows us better than we know ourselves. Peter had boasted that he would never deny Jesus; he would gladly die first (Matt. 26:33,35). Jesus knew better about Peter. He knows us better too. He knows both our strengths and weaknesses, and He loves us in spite of our weaknesses.

Second, following Jesus is costly. It demands bold faith. Jesus had not sugarcoated the life of discipleship. He had warned His followers more than once that they would face the same kinds of opposition and persecution He faced. That warning is still applicable today. The apostle Paul wrote in 2 Timothy 3:12, “All who want to live a godly life in Christ Jesus will be persecuted.”

Third, in the life of discipleship, failure doesn’t have to be final. Immediately after hearing the rooster crow, Simon Peter grieved bitterly about his failure of loyalty. He realized that Jesus had been right about him. The rooster’s call pierced Peter’s heart. He saw himself, coming face to face with his own failure. Yet Christ did not give up on His disciple. After the resurrection, Jesus graciously restored Peter to humble, loyal service (John 21:15-19). The risen Lord is just as willing today to forgive our failures and to restore us to faithful service.

For further thought: With what characteristics of Simon Peter do you most identify? Have you experienced a failure of loyalty for which you need Jesus to restore you today? Are you ready to turn to Him in repentance and faith?