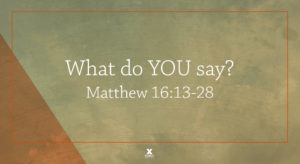 In Matthew 16, we find Jesus demonstrating an essential guideline for using discussion while teaching. Good teachers begin with the general and move to the specific. Here’s what I mean. You are teaching a group and the issue is temptation. You ask the group: What common temptations do people face today? As they respond, you list what is shared on the board. You then lead the group to rank the items listed from most difficult to resist to least difficult. After coming to a consensus on the ranking, you ask: Do you think this has changed over the last 20 years? Explain. After allowing the group to discuss, you might then ask: To what level is the ranking true in your own life? This series of questions moves from the general (list of temptations) to the specific (your temptation) without publicly asking what is your biggest temptation.

Jesus did not fail on that point. He asked the disciples what others thought about Him (general) but He did so to get to the real question….what do YOU say (specific)? What others say and believe has some value, but until that belief becomes our belief, what others say really has no bearing on our lives. Only when we own an idea or teaching as what WE believe will that idea or teaching have a bearing on our lives. As we teach, we must find ways of following Jesus’ example of moving from the general to the specific. We must also be willing to ask the real question…Who do YOU say Jesus is?

Who do YOU say Jesus is and to what evidence would you point in support of your answer?