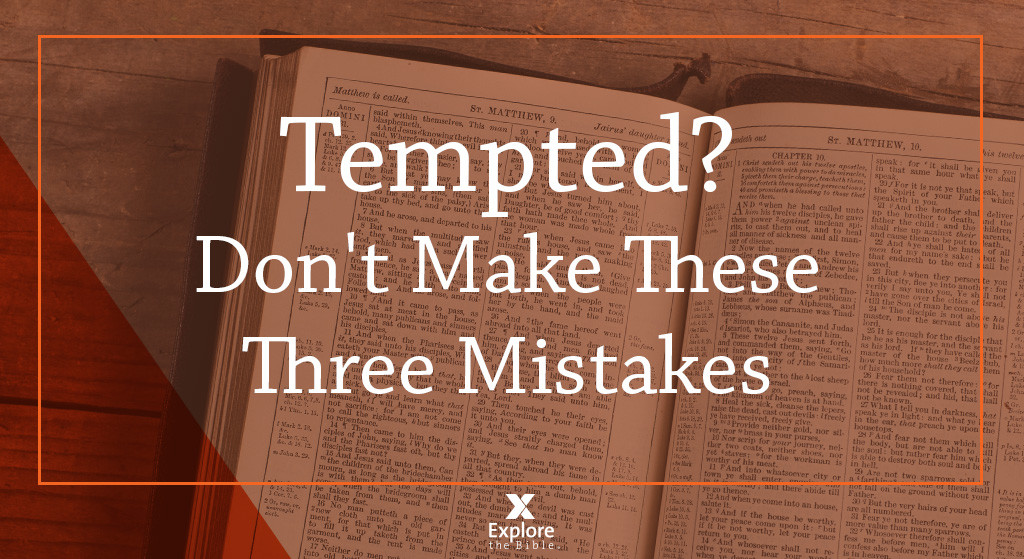 Scripture teaches that Jesus, the Son of God, was tempted in every way that we are tempted, yet without sin (Heb. 4:15). Think of it: there’s no temptation any of us face in life that He can’t relate to. He’s been there. He knows what it’s like. He faced all kinds of temptation when He lived on earth, but He never gave in. Not once did He yield to temptation. Not once did He sin.

That doesn’t mean the devil didn’t bring his A-game against Jesus. He surely did! The tempter has been a fearsome adversary of God and God’s people since he fell from heaven like a bolt of lightning. The tempter is clever too; he’s wicked clever. He knows how to lure people into deadly sin by attacking their weakest defenses, by pricking their worst fears, or by smooth-talking their deepest desires.

Still, it stands to reason that we can learn a great deal about how to resist temptation from the account of Jesus’ overcoming temptations following His baptism. One account of that event is found in Matthew 4:1-10. The Gospel of Matthew stresses that Jesus came into this world as the Son of God to be the King of kings. But He didn’t become the King in the same way human rulers become kings. The way of Jesus’ kingship was the way of suffering, death on the cross, and resurrection. That unique path of kingship began when Jesus “was led up by the Spirit into the wilderness to be tempted by the Devil” (Matt. 4:1).

Here are three mistakes that Christ’s followers can avoid regarding temptation:

Avoid the mistake of meeting physical needs while ignoring spiritual needs. Consider Jesus’ first temptation. He had been fasting for 40 days and 40 nights when Satan showed up and said, “If You are the Son of God, tell these stones to become bread.” Could Jesus have turned the stones to bread? Of course He could have! He was (and is) the Son of God. He made both the stones and the grain at the dawn of creation. He could have called down manna from heaven if need be. But the real question was not whether Jesus was able to turn rocks into bread miraculously but whether He would value a physical need (hunger) in place of the true bread of life—God’s Word. Jesus resisted the devil’s temptation by quoting a Scripture that says in effect: “I must not and I will not trade any personal ability, desire, or need for the essential life I receive from every word that comes from the mouth of God.”

Avoid the mistake of testing God. Consider Jesus’ second temptation. The devil showed Jesus one of the tallest points of the temple and dared Him to take a spectacular dive off the ledge—no doubt within sight of onlookers. Misusing a Scripture, the devil argued that God’s angels would protect Jesus from physical harm. What’s more, such a feat could easily transform Jesus into a celebrity Messiah in the eyes of many people.

But Jesus didn’t take the devil’s bait. He knew that God’s Word commands us never to put God to the test. We as believers can resist a lot of temptations by following Christ’s lead. The apostle Paul once asked the rhetorical question “Should we sin because we are not under law but under grace” and then answered the question with a firm “Absolutely not!” (Rom. 6:15). We should never flirt with sin by thinking: “It won’t affect me,” or “I won’t get caught,” or “I’m a Christian, so it doesn’t really matter if I give in occasionally to temptation.” Such attitudes open our heart’s door to outright sin.

Avoid the mistake of thinking a good end justifies sinful means. Consider Jesus’ third temptation. The devil took Jesus to a high mountain—perhaps in a visionary experience—and promised to give Jesus all the world’s kingdoms in exchange for one simple act of worship. All Jesus had to do was kneel down and pay homage to the devil. Just once. Jesus could achieve the grand purpose of His coming to earth with no opposition, no suffering, and no cross. But Jesus had heard enough of the devil’s lies. Worshiping the devil would lead to the opposite of what the devil was promising. Only the Lord God is worthy of worship. So Jesus ordered the devil to go away.

How about you? Have you ever heard the seductive voice of the devil saying, “Why live God’s way when you can live my way and skip any hardships or suffering?” Jesus showed us by word and example that while living God’s way is not easy or trouble-free, it’s the right way, the best way, and, ultimately, the only way of life.