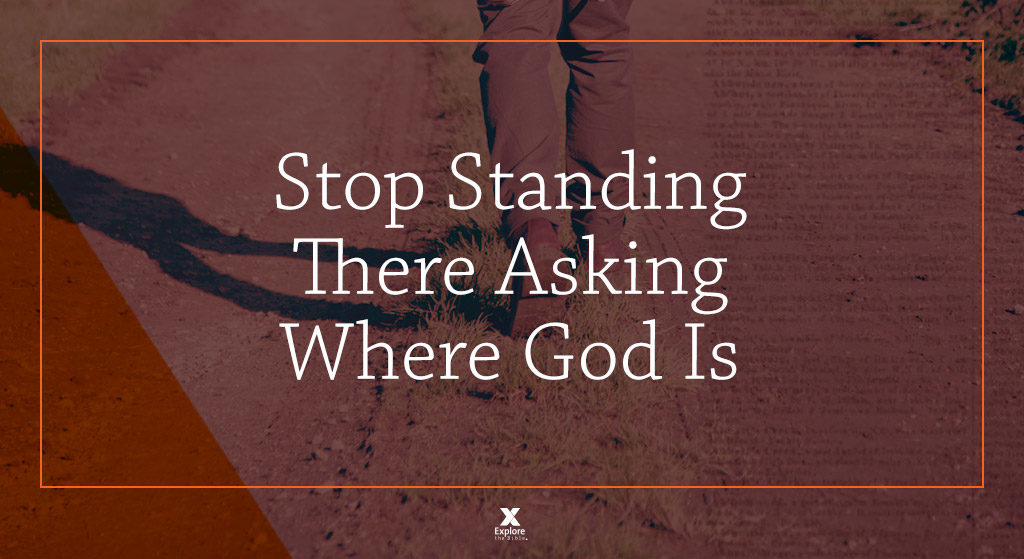 The Jordan River is not too intimidating most of the year, but is truly awesome when it floods. It was one thing for a few spies from the Hebrew camp to get across to Jericho at the beginning of the events described in the book of Joshua. It would have been quite another to bring safely across a nation of millions including the elderly and disabled. Observe:

When dealing in terms of what our omnipotent God could have done, we face an endless task, yet let’s attempt it nonetheless. Was God able to bring the Israelites to the bank of the Jordan when it was peaceful? Yes, He was, but He did not. Instead, He brought them to this river in this state at this time. Why? Because that is eternally best. Because He was not just bringing a group of people from one place to another, but was writing His story for all of us to read.

God brought them to the bank of a raging river because it was raging.

When we stand before such an impasse knowing that God could have delivered us from it, but has instead called us across it, let us not throw our hands up in the air and wonder where God is at that moment. My friends, consider the possibility that He is in the raging river. He is in its daunting white caps. He is in its rapids, its whirlpools, and its waterfalls. He has brought you to this bank of this river in this state so that He alone will get the glory when you get across. God used various means in various contexts to guide His people along their journies in the Bible. For example, He appeared in two varied forms in Acts 16 to guide Paul and company along their way; the original Greek naming the Holy Spirit (αγιου πνευματος) in verse 6 and “the Spirit of Jesus” (πνευμα ιησου) in verse 7. In these two instances, God forbade His people from passing a certain way. I believe this was God’s way of guiding them to what would eventually become the southern corner of Europe. As an American, I’m QUITE grateful for that intervention. Those northern regions of Asia of Bithynia were reserved for the ministry of Peter.

Think on the important distinction between God stopping someone from passing a certain way (Acts 16) and God setting the stage for a miracle (Jos. 3).

In Joshua 3, God instructed the people through Joshua (to affirm his leadership as tantamount to Moses’) to actually carry the ark of the covenant toward this raging river! This would have seemed crazy. Can you imagine being the priest who lost that game of “rock paper scissors” and had to be at one of the front posts physically carrying the ark? In 2 Samuel 6:6, Nakon died after grasping the ark as it slipped from its mounts when the oxen carrying it stumbled! Now, they are to carry it toward the bank of a raging river. You should have chosen rock, priest! It is no wonder the people were told to keep such a wide berth from the ark as they crossed the Jordan on dry ground.

Then, the purpose of the river’s raging became clear. It flowed vertically. It flowed vertically because God is the Creator of water and may command it to do thus. God could have caused the river to do that before, but He set the stage for this seemingly impossible act of worship. Aren’t you so thankful God did not cause the river to flow vertically, or merely calm down? God was writing it for we subsequent generations whose combined numbers dwarf those of the Israelites who saw it firsthand.

Note that the ark of the covenant went both before the people (God is the Alpha) and then came up after the people (God is the Omega). Do not stand there asking where God is. God was before the river flowed its first. He is now. He is to come. He was baptized in the very River named in this story and the book of Revelation describes a river flowing from the throne of God and of the Lamb bringing with it the healing of the nations.

As I picture this river of life, I imagine that it rages like the Jordan in Joshua 3.

If He has called you across as He called the Israelites, then crossing does not conflict with God’s Word the way Paul and company would have if they disobeyed the Holy Spirit and the Spirit of Jesus in Acts 16. If He has indeed called you to cross, then the purpose is that you would face it, that He would deliver you, and that you would then give Him every ounce of the glory for carrying you across.

The Israelites built altars of 12 stones on the distant shore to give glory to God. I believe our testimonies are to be landscapes littered with such altars in which we point to the way God brought us through in a way we could not have achieved by our own means. So, do not stand on such banks and ask where God is. He is in the raging of the river – writing a story.

So, be strong and courageous, Christian.