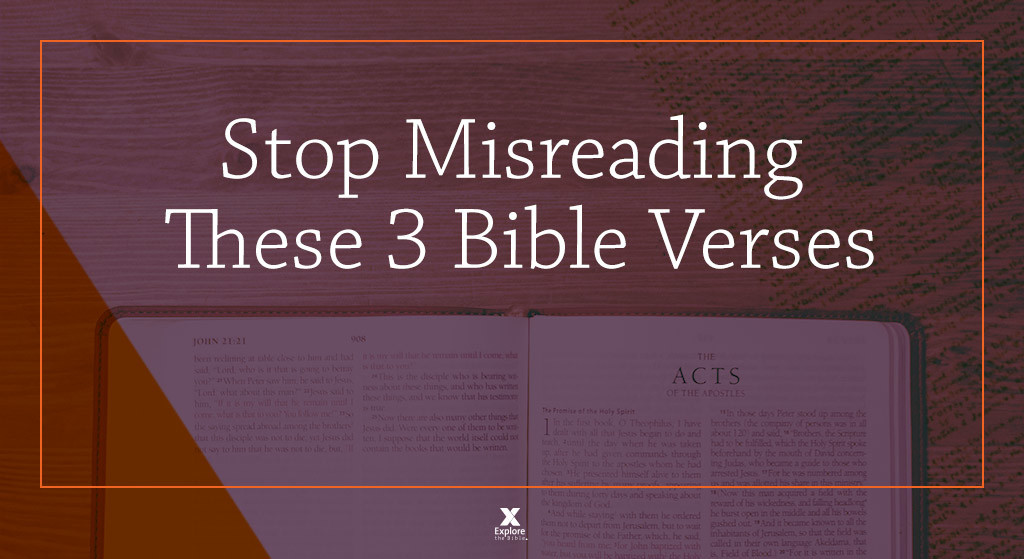 I love placing Scripture all around me.  The daily Bible verses sent to me by my former student Bobby are a quick reminder to keep Him at the center of my thoughts.  However, grabbing one verse at a time is not a good method for studying the Scriptures, as it can lead to taking verses out of context.  Here are a few common passages that are all too frequently misinterpreted.

“For where two or three are gathered in My name, I am there among them.”  Matthew 18:20 Whether kicking off a Bible study, or opening a time of worship through music, this verse is regularly invoked to thank God for His presence.  While it is certainly true that God is present in the gathering of His believers, using this verse in this way takes it out of context.

This verse is part of a teaching from Jesus on how to deal with sin among believers.  Confronting someone about their wrong choices is very hard, and doing so in front of witnesses is even more difficult.  Jesus promises that when we follow His method for dealing with sin, He will be with us.  However, to use this verse as a benediction over all gatherings of believers implies that God’s presence is more powerful when we are gathered together.  God is just as powerful and present with one believer praying to Him as He is in a gathering of believers.  Next time we want to thank God for His holy presence in our Bible study, just thank Him!

“For I know the plans I have for you”—this is the Lord’s declaration—“plans for your welfare, not for disaster, to give you a future and a hope.”  Jeremiah 29:11 Many people look to this verse as a source of encouragement, and so it is!  However, I fear that it is often used out of context and to send a message that does not line up with the Word of God.

The people of God had continually rejected Him in favor of false gods.  They did not keep His laws, they persecuted, even murdered His prophets.  Finally, God removed His hand of protection and allowed His people to be attacked by Babylon and carried into captivity.  While they were in captivity, God sent them this message: He has a plan.  What was God’s plan of peace that would give a future and a hope?  Jesus Christ!  The Prince of Peace!  The One who brought hope to a hopeless world, and assures us an eternal future with God!  But God was not promising an easy life on this planet.  His people still endured grueling captivity, and later invasions by Greece and Rome.  Paul was imprisoned, hunted, stoned.  Jesus’ disciples were persecuted, martyred, exiled.  Yet this verse was true for them, as it is for us today. So, rather than use this verse to give an empty promise of material comfort and fleeting peace, let us see this verse for what it is:  a call to live by faith in God with eternity in mind, no matter what these passing years on earth may bring!

“Now these three remain: faith, hope, and love. But the greatest of these is love.”  1 Corinthians 13:13 This entire chapter is a frequently misinterpreted passage. It is often quoted is in the context of romantic love, and the truths in this passage certainly apply to building a healthy marriage. In fact, Paul himself conflated his own Spirit-inspired teachings about husband and wife with Christ and the church (Eph. 5).  However, the context of this passage is spiritual gifts and their maximized use in the church. This is why the first 3 verses of 1 Corinthians 13 are often omitted when the passage is read during wedding ceremonies!

Paul takes us through a series of profound spiritual gifts and calls us to imagine them being used without love. We imagine Paul himself being gifted with faith that can move mountains, but lacking love and the result is a wasted spiritual gift. We imagine Paul being given the spiritual gift of knowledge to its very zenith, but lacking love in his heart. The result is “nothing.” Paul’s examples even apply directly to Paul’s ministry. He did forego material wealth (1 Corinthians 9), he did speak in tongues (1 Corinthians 14), he did have the gift of prophecy (2 Timothy 3), and he shows us through this text how none of his gifts would mean a thing were it not for the catalyst of love by which God used them. A gifted prophet who is motivated entirely by pride and a generous giver whose sole aim is recognition are not acting out of love. Their impact is nothing compared to that of the humble heart who exercises spiritual gifts for the greatest of causes; God’s love. So, by all means, apply to marriage what 1 Corinthians 13 allows, but first and foremost let the text speak as it was contextually designed – as a crucial teaching about the use of spiritual gifts.