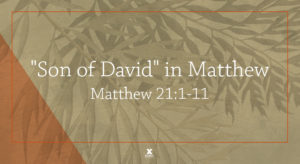 The Bible Skill in the Adult and Young Adult resources brings attention to the term “Son of David.”

As Jesus made His way into Jerusalem on a donkey, the crowd that was assembled began to place their robes and branches on the road to pave the way. They declared Him to be the Son of David (Matt. 21:9). Matthew used this title for Jesus more than any other Gospel writer (ten times, with six of them being unique uses by Matthew). The term pointed to the Messiah, the anticipated delivered of Israel.

In 2 Samuel, Nathan was sent to David with a message from God. Nathan’s message included a promise that a descendant of David would rule a never-ending kingdom (2 Sam. 7:12-16). The eventual fall of Jerusalem and the exile of the king to Babylon clouded the understanding of most Israelites. By the time of Jesus, this promise became understood in solely political terms. They believed the Messiah would free the Israelites from all foreign power and they would become a world power under this king.

At His triumphant entry, Jesus was publicly recognized for the first time as the Messiah by the crowds. The problem wasn’t the recognition but rather the expectations of those in the crowd. They wanted a conquering hero who would arrive with fanfare and military power. The crowd greeted Him and then waited. They witnessed Him turning over tables and dismissing merchants before being challenged by the religious leaders. The crowd’s unmet expectations led them to indifference and ultimately into calling for the crucifixion of Jesus. The people knew Jesus had come to establish His kingdom, but they failed to understand that His kingdom was different from the kingdom they imagined.

Matthew used three terms to introduce Jesus at the beginning of his Gospel account: Jesus Christ, Son of David, and Son of Abraham (Matt. 1:1). He was writing to a Jewish audience and sought to help them understand Jesus’ identity and mission as the Messiah, the Son of David, who would become a sacrifice just like Isaac. However, this Son was the Lamb substituted for all of humanity.