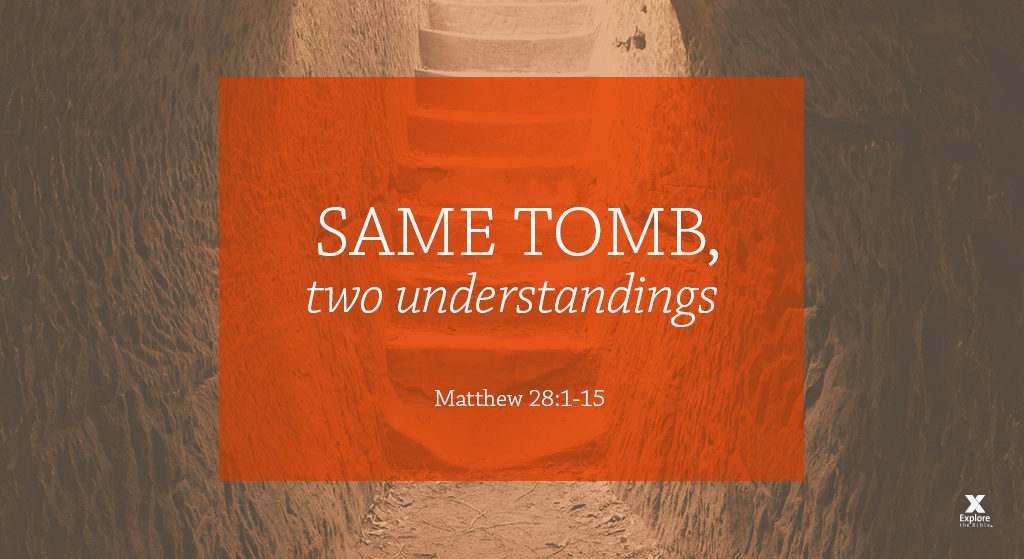 There are some things in history most of us would like to have witnessed: the moment Francis Scott Key saw the flag flying over Fort McHenry; the removal of the first section of the Berlin Wall; the moment that the first page emerged off Gutenberg’s press.  Most of us would have variations of this list, but no doubt the moment the stone was removed from the tomb of Jesus would be on the list. Imagine what that scene must have been like. Everything was shrouded by the darkness of the night. Soldiers were stationed as shadows in the night. These were Roman soldiers, rough and tough, ready to fight to the death to keep the tomb secure. Then it happened. The stone rolled away, and these soldiers fell like dead men. What a moment in history!

These Roman soldiers were the only witnesses to the actual event. We can only imagine what went through their minds as they came back to their senses and began to talk with each other. We can guess that they were amazed, confused, and afraid all at the same time. Who would believe their story? What was their story? The Pharisees made sure we would never really know THEIR story, paying them to say the disciples stole the body (Matt. 28:11-15). Think of what it must have been like in the days and years that followed, knowing the truth but being afraid to share it. One wonders how they could live with that reality day in and day out. Maybe they didn’t; we just don’t know.

Compare these “brave” soldiers to the reaction of the two Marys (Matt. 28:1-10). They arrive looking for a body, and the only thing they find is an empty tomb left unprotected by the “brave” soldiers. They too see the angel, but they approach him looking for answers. They are given the grandest news of all history, being the first humans to hear that Jesus had conquered death! They saw the same tomb as the soldiers did, but what they saw brought a different kind of fear, a reverential fear filled with awe and hope.

As we celebrate Easter, many will look at this weekend with different understandings. They will accept a lie for the truth, focus on logical explanations, or try to sleep to ignore the truth. The cross and resurrection are foolishness to them. However, for those who have met the Savior, this day is different. Our Savior lives as the Conqueror, the Mediator, and the Lamb who takes away our sin.

Read Matthew 28:1-15 and create a chart listing the reactions of the soldiers and the two Marys. Compare and contrast the reactions. What insights do you gain by doing the comparison? What factors influenced the way the two different groups responded? How do those same factors influence people today?