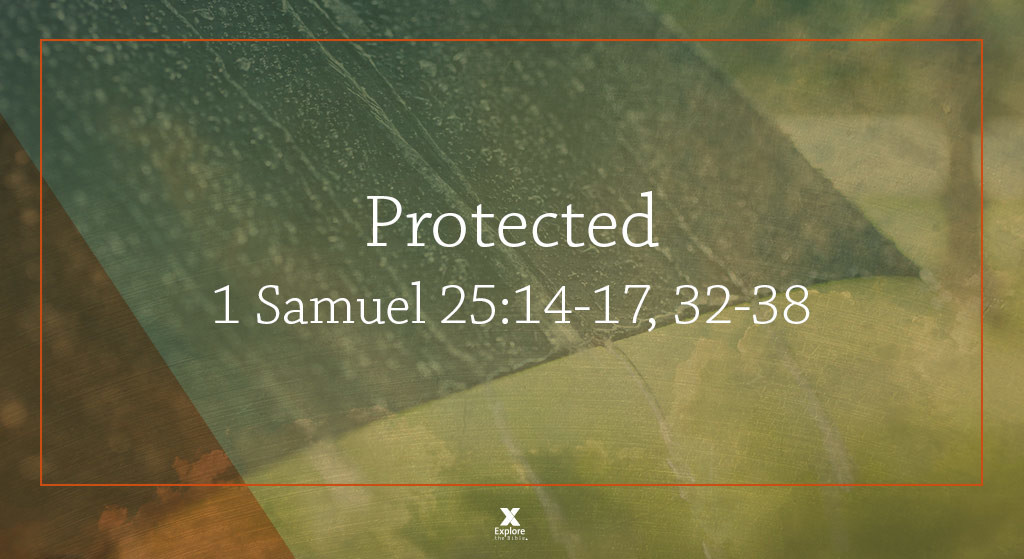 Today you kept me from participating in bloodshed and avenging myself by my own hand (1 Sam. 25:33b).

It is a rare inherited condition—about one in a million people are affected—but it is a parent’s nightmare. The condition is called “congenital insensitivity to pain” (CIP). The name says it all: a person is born with the inability to feel physical pain. Loving parents do everything they can to protect their young children from external harm. But parents of children with CIP have an added burden. They must try to protect their children from unknowingly hurting themselves.

Children born with CIP feel no pain when they chew their tongues, cut themselves, or twist an ankle. They can unwittingly touch a scalding-hot object and not realize they are being badly burned. They often need their parents to keep them from hurting themselves.[1]

Have you ever felt that God protected you from hurting yourself with sin? David did.

From the time the prophet Samuel anointed young David to be Israel’s next king after Saul (1 Sam. 16:13), the Lord was with David to protect him from Saul’s jealous wrath—which was fierce! Multiple times King Saul attempted to kill David, twice by personally flinging a spear at him (18:10-11). David eventually had to go into hiding, moving from one place to another with his band of followers to stay out of reach of the king’s troops. In all of these experiences, the Lord was with David and protected him from harm (18:12; 23:13-14).

In one experience, however, David faced a different sort of danger. First Samuel 25 chronicles an event in which David became furious with a man named Nabal for refusing to supply provisions to David’s men (25:4-12). David reacted by marshaling 400 of his warriors with whom he planned to slaughter Nabal, his family, and his workers (25:14-17). As David later admitted, only the Lord’s providential help kept him from committing a heinous act of bloodshed (25:32-33). The Lord not only kept David from killing innocent people, He also protected David from disqualifying himself as king.

In this intriguing chapter in David’s life, we can see three ways God protected David from himself. Perhaps God has worked similarly in your life to keep you from sin.

First, God sent an unexpected “protector” into David’s path. Nabal’s wife was named Abigail. When she heard from a servant how her husband had shamefully treated David and his men, she immediately gathered several donkey-loads of provisions and set out to intercept David with the gift (25:18-19). Encountering David and his men along the road, Abigail humbled herself before David and interceded for her family. Abigail affirmed that the Lord was involved in their meeting, keeping David from “participating in bloodshed and avenging [himself] by [his] own hand” (25:26).

As you look back on episodes of your life as a believer, can you recall times when someone intervened and helped you avoid committing sin? Perhaps the “protector” was a parent, a teacher, or a Christian friend. You might not have realized it at the time, but God was working providentially through that “protector” to keep you from harming yourself. How thankful we ought to be for that divine protection!

Second, God gave David a new way to react to insults. David and his men needed food and supplies to be sure. But Nabal’s refusal to help was also a blatant lack of hospitality. Showing hospitality was a deeply personal feature of Israelite culture. To refuse hospitality, especially to a fellow Israelite, was a severe insult. Nabal had shamed David in the eyes of his men (25:9-11). David’s immediate reaction was to make Nabal pay dearly for the insult by slaughtering not only Nabal but also the man’s entire household and workforce. Through Abigail’s brave intervention, God gave David a different way of responding to Nabal’s shameful action—the way of forgiveness (25:28).

Jesus told His followers in the Sermon on the Mount, “You are blessed when [people] insult and persecute you and falsely say every kind of evil against you because of Me.
Be glad and rejoice, because your reward is great in heaven” (Matt. 5:11-12). The apostle Peter echoed Jesus on this matter in 1 Peter 3:9: “not paying back evil for evil or insult for insult but, on the contrary, giving a blessing, since you were called for this, so that you can inherit a blessing.” How ready we ought to be as Christ’s followers to choose God’s way and thus be kept from committing sinful actions that go beyond the hurt we ourselves have experienced.

Third, God reminded David that all people, whether kings or beggars and all in between, are accountable to Him for their actions. David praised God for sending Abigail to intervene before he participated in shedding innocent blood and “avenging [himself] by [his] own hand” (1 Sam. 25:33). In Deuteronomy 32:35, the Lord declares, “Vengeance belongs to Me; I will repay.” The apostle Paul quoted this declaration in Romans 12:19 to urge believers to leave room for God to take whatever vengeance was needed. Only God knows all the facts of a situation. Only He is absolutely just and righteous. Believers are not to be conquered by evil but are to “conquer evil with good” (Rom. 12:21). By remembering that we all are accountable to God for our actions, such knowledge can serve as a hedge of protection—keeping us from sinful overreactions by letting God be the Righteous Judge.

Thank You, Lord, for Your protection in this fallen, dangerous world. I praise You for all the times You have protected me from hurting myself with sin. Teach me to choose Your ways in all that I say and do today.

[1] For more information about the rare condition CIP, see the Web site painlessbuthopeful.org.