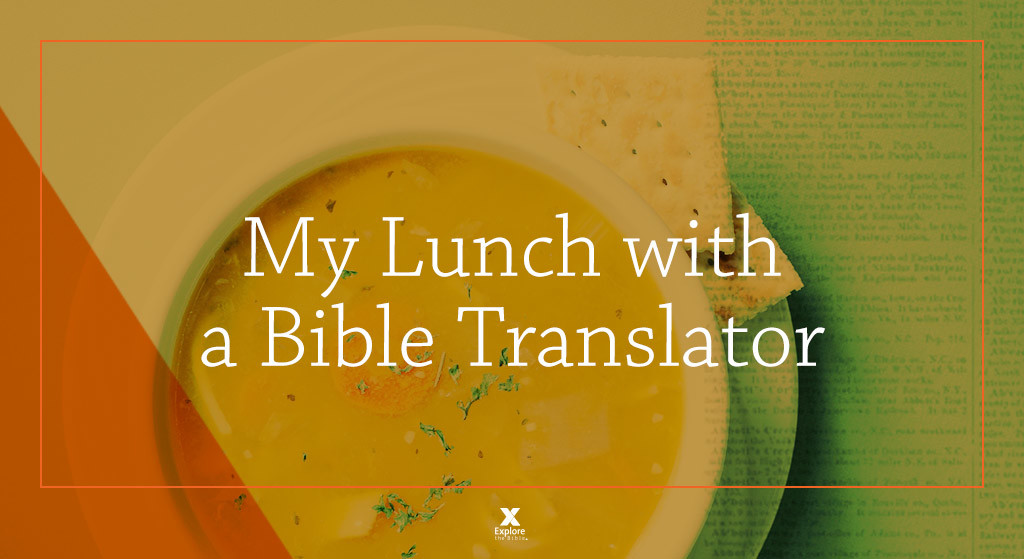 This is part 1 of a series of posts. Part 2 will be available soon.

Imagine how the process of producing a new Bible translation begins. Estimate the number of people involved in selecting ancient manuscripts and bringing about a new English translation of the Bible from them. Imagine the painstaking and thoroughly spiritual process of moving word-by-word and thought-by-thought through the ancient Hebrew and Greek in their various dialects. Feel the weight of the work you’re doing and consider the ramifications of a mistake. Consider the company you keep throughout the ages dating back to Luther himself. Hear the armchair critics mocking you preemptively. Intimidated yet? David Stabnow Ph.D. is a genius. He is one of many brilliant people on our team of Bible translators who have edited the HCSB. Our own Drew Dixon sat down to have lunch with David Stabnow. The following is an highly truncated transcription of their recorded conversation. It has been condensed significantly for brevity.

Did you always want to get into Bible translation? How did that come about?

“Well, I was always interested in the Bible. Even when I was programming computers, I studied Greek with my pastor. When I went to seminary, I knew that my personality wasn’t right for being a pastor. I wanted to be a teacher, actually. So, I went to Bethel and then onto Westminster for my Ph.D. I started out in New Testament, but then came to favor the Old Testament. After graduation, I spent a year teaching Hebrew in Africa.”

So, Hebrew always clicked with you?

“Yeah, I compare it to choosing three random letters from the alphabet at random and assigning a meaning to them. [laughs] There are so few words that have an English cognate to them. Menora, Amen, camel that’s about it. [laughs]”

So, Bible translating isn’t what you set out initially to do, but it works?

What does a normal day look like for you?

Well, I’m editing a commentary series right now. Right now, we’re changing some of our products and are looking at the study notes for the Holman Study Bible.

Yes, we had someone go through and make suggestions for where we need to add and modify things to make the study Bible better. There are at least three of us working on that project right now.

When we were working on the HCSB, there were 5 people on the Old Testament committee and we were each assigned part of the canon. I think mine was 1, 2 Samuel and Numbers. We were told to see if there was something in the English style that needed to be improved based on a comparison with the original Hebrew. Sometimes, we would say, ‘No, that’s a good translation of the Hebrew,’ or ‘we could change this to better English and it would still be true to the Hebrew,’ or we would say, ‘this other English translation is different, but is it right?'”

There are different schools of thought on translating the Bible. You have to make interpretive decisions if there’s not a clear English correlation. How do you handle those instances?

“Translating the Bible is always interpretive. There are some things in Hebrew that are totally obscure and opaque. With those, we do our best to make an English correlation and make a footnote to clarify. Often, we would start with a very wooden translation and then put the English words in their proper syntactical order.”

Can you give an example?

Well, one Proverb I’ve done a lot of work on is Proverbs…22:6. The traditional translation of that is, “Train up a child in the way he should go and, when he is older, he will not depart from it.” The word that is translated “train up” is something like a word that we might have for the celebration of, or the dedication of, a new building. It’s inaugurating something for the way it was meant to be. Then, the word often translated “child” is not the typical word for child. It’s “na’ar,” [Strong’s 5288] it’s the word used to describe a boy around bar mitzvah age. What that kind of says is, hold a celebration for a youth when he is ready to do what he should be doing and, when he’s old, he’ll stay on the path of what he should be doing. It’s interesting because it’s different from how it’s typically translated.

It’s funny because that verse is so ingrained in our brains and to change that verse would seem like a crime against the Bible. How would you respond to that?

Well, translators are often accused of changing the Bible, but what we’re really doing is making sure the translation is true to the original Greek, Hebrew, and Aramaic. The Bible wasn’t written in English.

(Part 2 of this interview is coming soon.)