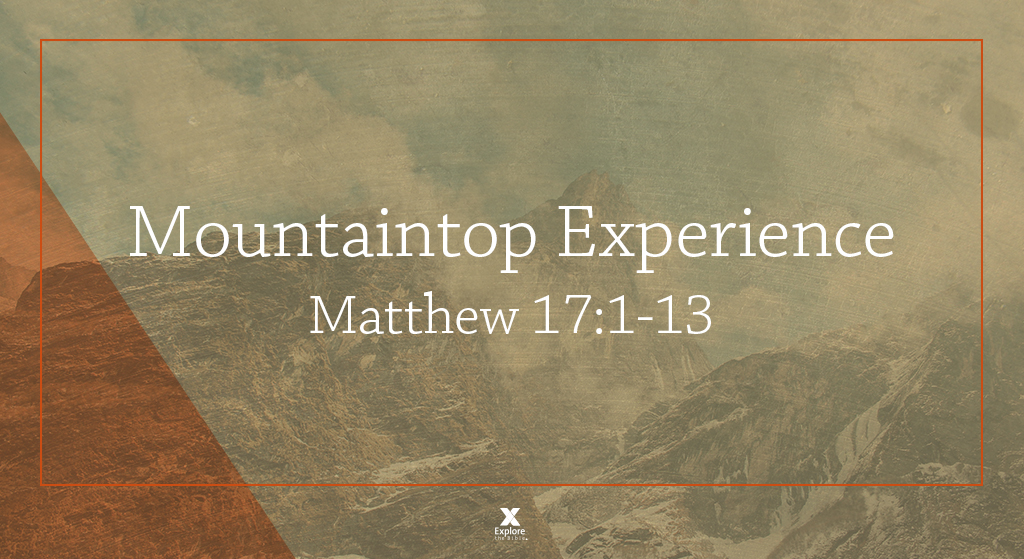 What is your ultimate mountaintop experience?

Thousands of people would say the answer is to stand on the “roof of the world,” the summit of Mount Everest. Since the first reported successful climb of that 29,000-foot peak in 1953 by Edmund Hillary and Tenzing Norgay, more than four thousand different individuals have experienced the thrill. Ironically, remaining on the summit for more than just a few minutes can be dangerous for climbers—even life-threatening. Nighttime temperatures drop well below zero, the air is razor-thin, and killer storms can strike without warning. Still, nearly a thousand people every year train vigorously, pay steep fees, and make the trip to south Asia for the opportunity to enjoy an ultimate mountaintop experience.

Three of Jesus’ disciples would no doubt put a different experience atop their list. Simon Peter and the brothers James and John accompanied Jesus one day up on a high mountain (Matt. 17:1). We don’t know the name of the mountain or its height—the tallest peak in the region was less than ten thousand feet high—but we know this event became the trio’s ultimate mountaintop experience. They witnessed Jesus’ transfiguration—a majestic visualization of the Lord’s divine nature as well as His approaching death and resurrection.

Ironically, the three disciples misunderstood nearly everything about that experience as it was occurring. Jesus’ visage became as bright as the sun even as the long-dead Old Testament heroes Moses (representing the law) and Elijah (representing the prophets) appeared and talked with Jesus. Peter immediately recommended the building of three shelters, presumably so that all six people could stay together on the mountain indefinitely.

Next came the same audible voice from heaven that had spoken previously at Jesus’ baptism (Matt. 3:17). It was the voice of the Heavenly Father, saying, “This is my beloved Son, with whom I am well-pleased.” The experience completely mortified Peter, James, and John—until Jesus calmed them, and they saw that only Jesus remained.

Finally, Jesus directed the three disciples not to tell others about their experience until after His resurrection. The transfiguration was a foreshadowing of that event, but Christ’s followers would not be able to clearly see that until after the resurrection. Peter, James, and John thought that Elijah’s appearance on the mountain with Jesus that day surely was a fulfillment of prophecy. But Jesus explained that Elijah had already come in the ministry of John the Baptist. In other words, the fulfillment of the Messiah’s mission of salvation was nearer than the three disciples knew.

The fact that the transfiguration is reported in all three of the Synoptic Gospels (Matt. 17:1-13; Mark 9:2-13; Luke 9:28-36) and is alluded to in John’s Gospel (John 1:14) as well as in 2 Peter 1:16-18 underscores that Peter, James, and John never forgot their trip with Jesus up on the mountain. It was their ultimate mountaintop experience.

Questions for further thought: Where and when have you been overwhelmed by a deeper understanding of who Jesus is and what He has done for you on the cross? How does that experience encourage you now?