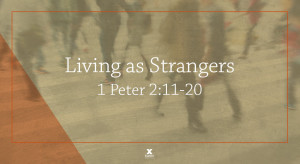 Do you ever wonder what the original builders think when watching a television show where someone renovates a structure they built? Watching someone take a sledgehammer to a wall you framed and sheetrocked would be a little uncomfortable. Moving walls, opening up or closing a space, and ripping out a bathroom seem to be standard actions during a remodeling. In some cases, the original builder would not recognize the inside of some renovated homes. In effect, the builder would be a stranger in what was his own creation.

Jesus reminded His disciples that they were not of this world just as He was not of this world (see John 17:14-16). But wait a minute! He is the One who created this world. It is HIS world, yet He was a stranger or foreigner? He created it to be something completely different than what He saw as He walked on the dirt He spoke into existence. Sin turned what the Son created into a hostile place.

How does identifying with Christ make a person a foreigner in this world? Why would it have been important for Peter’s readers to understand that they were foreigners in this world?