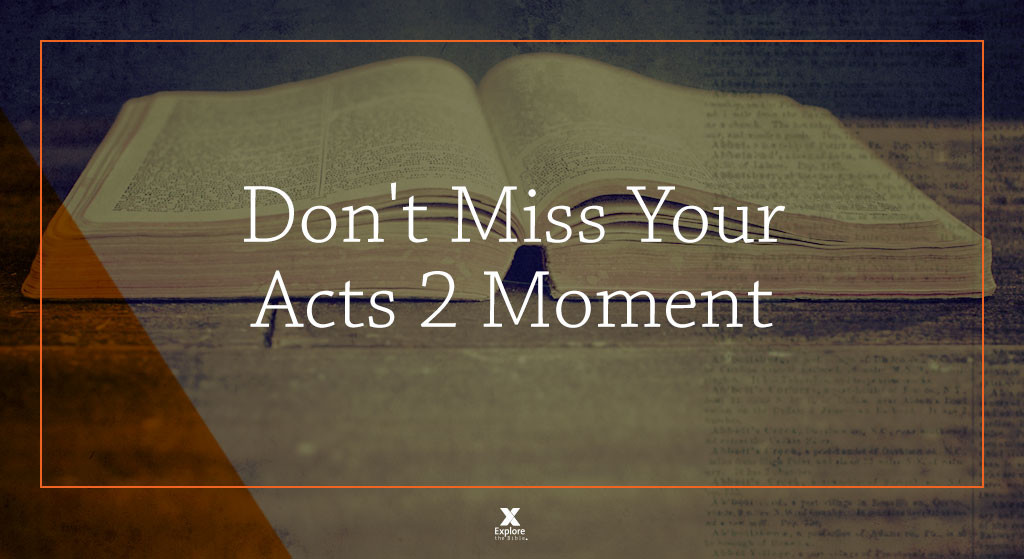 The Holy Spirit’s arrival upon the multinational crowd of Jews gathered at Pentecost miraculously lifted the confusion of man’s speech at the tower of Babel. Thus, the gospel of Jesus Christ overcame the language barrier to reach people of every language and dialect (vv. 5-11). It was just as much a miracle of hearing as it was a miracle of speech. The movement of the speaker’s mouth did not prevent the hearer from understanding – though speaker and hearer spoke different languages or dialects. It was also an undeniable sign to unbelievers (1 Cor. 14:22).

Some people marveled (v.12). Thousands were saved (v.41). Some people mocked the whole scene (v.13), but Peter’s experience was different from everyone else’s. This was his moment and his ministry would never be the same again.

When we first met Peter, he was an uneducated fisherman (Matt 4:18-20, Acts 4:13). He was often the spokesman for the other disciples and he often misspoke. He was reckless and a bit violent (John 18:10), but Jesus prophesied that he would be the rock upon whom God’s unconquerable church would be built. The night Jesus was arrested, Peter promised to follow Jesus anywhere and even lay down his life for Jesus, but Jesus corrected him preemptively. Later that night, Peter cowered at the accusations of a servant girl and three times denied even knowing Jesus. He was the last person you would imagine standing before the crowd at Pentecost and boldly raising his voice in calling the massive crowd to repent from their sins and be baptized (v.38). Of course, Jesus knew this and so ministered to Peter in a poignant way after His resurrection. The two sat on the beach in John 21 and Jesus lovingly confronted, instructed, and healed Peter precisely at the three points of Peter’s greatest shame.

Now, a transformed Peter stands filled with the Holy Spirit at Pentecost. It is imperative to notice also that he stands accompanied by his fellow apostles (v.14). This was his moment. He stood, raised his voice, and addressed the crowd. What he taught was essentially an expository sermon on Joel 2. The Spirit cut people to the heart (v.37) and Peter made no attempts to water-down the gospel message when the people to whom he spoke asked, “What shall we do?”

Peter did not allow his past failures or his familiar fears to keep him from speaking God’s Word to the crowd. He spoke not in proportion to his own intellect, charisma, or powers of persuasion, but in proportion to the Holy Spirit’s capacity to bring about transformation. As a result, Jesus’ prophecies over him came true and the New Testament church was born. So, what if Peter had succumbed to fear and shame over past failures? What if he had attempted this powerful message on his own power? Then he would have missed his Acts 2 moment. What if you define what God is able to do through your ministry based on your past failures and your familiar fears? Do not miss your own Acts 2 moment. You may not stand in front of a crowd of thousands, but as a Christian, you do have the same Holy Spirit that changed the world that day at Pentecost. God achieved this revival through Peter. Just imagine what He can do through you.