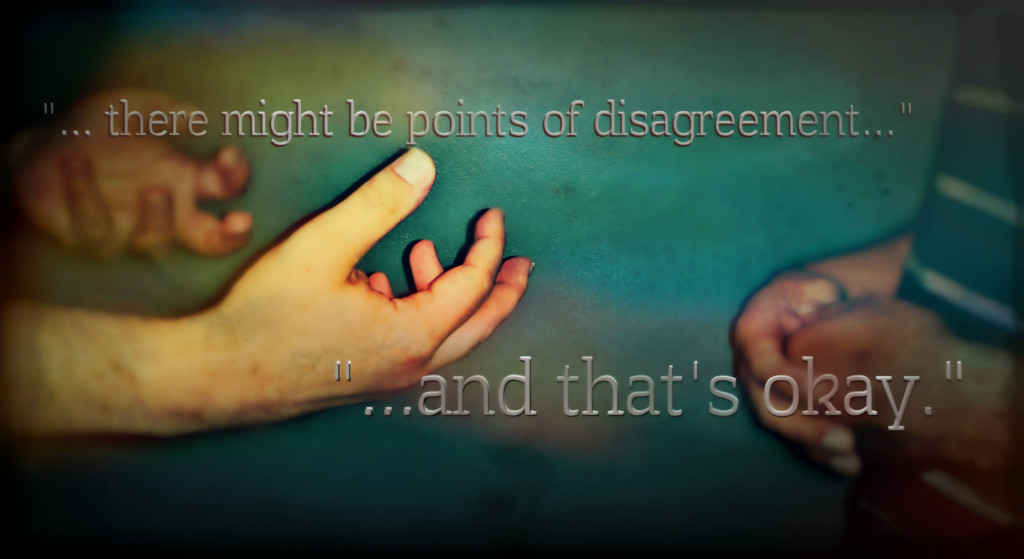 Written by Philip Nation: Director of Content Development at Lifeway

Discussions and Disagreements
In Session 11 of our study this quarter, we will look specifically at Revelation 12:1-17. In the “Understand the Context” section of the session, we take a look at the large passage of chapters 10-20 of the book. In the Leader’s Guide for the curriculum, the explanation is of the four major interpretations regarding the 1,000-year reign of the Messiah. The four views have often been hotly defended and debated by their proponents.

In your Bible study group, it is possible that discussions around such a subject as end-times theology will produce passionate discussions, or even debates. When we deal with issues that fall inside of our doctrinal consensus as a church wherein there are points of disagreement, we need to learn how to discuss them properly. Your group may have already had one or plenty of such discussions where interpretations were challenged. Let me give a bit of advice about how to handle such discussions and disagreements.

Be intentional. Don’t prepare with the hopes that it will not happen. Instead, tell the group ahead of time about what the discussion will entail and that there might be varying viewpoints. In fact, an email out to the group prior to the gathering will help everyone be prepared.

Set the ground rules. As the leader of the group, you must set the tone. If you don’t, the first one to voice their position will do it for you. It does not have to be a tense rattling off of the “rules for theological combat.” Rather, let the group know that there may be some disagreement during the discussion and that it is okay. Hold up humility, hospitality, and civility as virtues that are needed for spiritual friendships to thrive.

Don’t make it personal. The discussion is about the issue, not the person stating their perspective. Help the group members address the issue rather than allowing sarcastic bombs to be lobbed at each other. If someone makes a personal jab, then ask the person to recognize it and make amends.

Clearly state what territory you are in. It is important to help members of the group understand if you are discussing an issue that is inside of our orthodox beliefs or touching on a subject that is deemed historically heretical. For example, to discuss the four major views of the millennial reign of Jesus is territory within the orthodox faith of Christianity. On the other hand, discussing the nature of Jesus and claiming that He was created by God as a normal man is a perspective that takes you outside of our faith. You can take the verbal temperature of the room down a notch if you help everyone understand if the issue is about orthodoxy or about a concept over which the church has debated for centuries.

Represent others’ views fairly. Don’t allow a member of the group to mischaracterize a viewpoint just so they can make it appear silly. If you are going to disagree with someone’s perspective, do so with respect. Caricatures of others will create division in the relationships.

Don’t allow a contentious spirit to dominate. Robust and passion discussions about our faith and the Bible are good. But a contentious spirit toward one another is destructive. If you see the conversation getting out of hand, intervene. Remind the group that we are called to live in unity as Christ followers.

Plan for the conclusion. Unless you intend for the discussion to fill the entire small group meeting, make sure you plan on how you will conclude the discussion. It can be as simple as “I know there is more we could talk about __________, but let’s make sure we cover some other ideas and find how they apply to our lives.”

Follow-up. In the days after your discussion (or debate), do some personal follow-up with both those who vehemently stated their position and those who remained silent. Everyone will likely need a debrief of some length to relieve any left over tension. In the next group meeting, do not ignore the fact of the previous discussion. Acknowledge and help people move on to the next topic of biblical conversation.

Discussion and debate about how to understand and apply biblical passages is necessary. As you lead your group, ensure that you prepare yourself and your friends for how to do so in a way that leads to spiritual transformation.