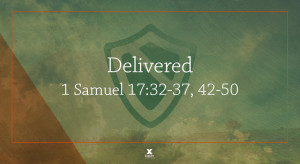 God had prepared David for his encounter with Goliath. David had fought a lion and a bear while guarding his family’s sheep. He pointed to both these experiences as preparing him to face Goliath. In a way, the battle with Goliath was preparatory for what lay ahead for David. He would be called on to express trust in God as he waited to be king. His courage would continue to grow with every battle he faced. The humility demonstrated after the defeat of Goliath would once again be tested as David responded to Nathan with confession and brokenness.

The Bible Skill included in the adult and young adult resources highlights two experiences recorded by Luke that prepared Jesus for His early ministry. In Luke 2:41-50, we find the story of Jesus being left behind by his parents in Jerusalem. The setting was a Passover feast, which Jesus attended every year as a child. This same feast would be the backdrop for His crucifixion and resurrection. When Jesus was found by Mary and Joseph, He was involved in dialogue with religious teachers at the temple. Later in His life, we find Him involved in dialogue with the religious teachers and leaders, asking them questions, with Jesus now being the Teacher. In Luke 4:1-13, the Gospel writer tells of Jesus’ temptation experience in the wilderness. These same temptations would make their presence known while Jesus hung on the cross. The taunts of the crowd were not much different from Satan’s invitation for Jesus to leap from the temple.

For both David and Jesus, their experiences sharpened their awareness of the Father. Both knew that the Father was moving them forward as leaders and as His servants. They also were aware of their need for dependence on and trust in the Father. Their experiences would become the foundations on which their greatest triumphs sat.

The Father continues to shape and mold His followers today. Our experiences serve as a means by which God directs us forward in our development as His servants. In time, we will see how those experiences prepare us for our service in His kingdom today and tomorrow.

How has God used your past to shape you for service today? How might the things you are facing today be preparation for what God wants you to do in the future?