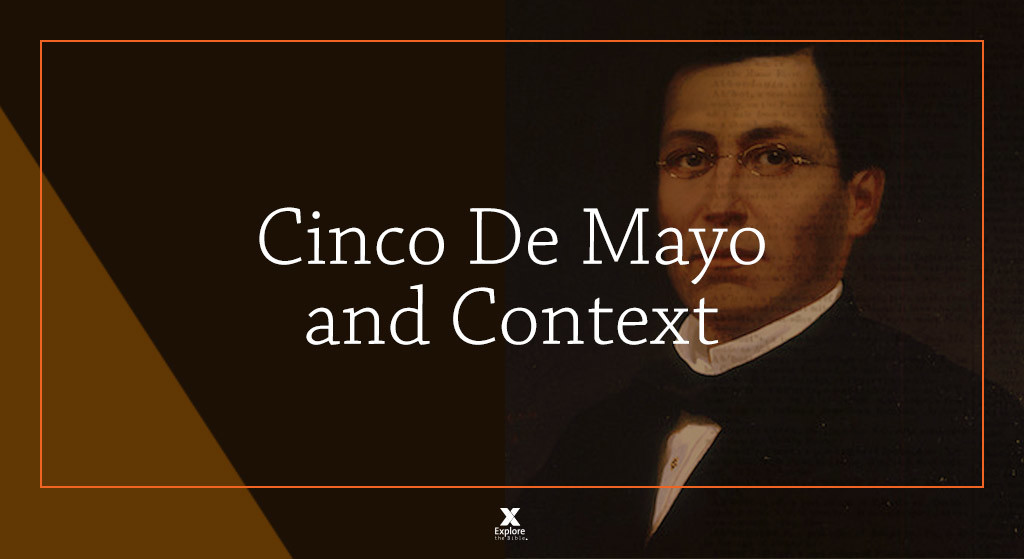 Nashville, like most big cities, experiences a one-week transformation every year around the 5th of May.  Restaurants of all idioms suddenly assume a south of the boarder flair. That’s just the way the American culture rolls.  We’ll commandeer any occasion for a celebration, even when we don’t know what in the world the celebration is all about.

Yesterday, walking down Broadway to the train station, I played dumb and asked some people this question: Do you know the story behind Cinco de Mayo? Nobody knew other than it was Mexican and that they intended to use it as another opportunity to imbibe.

They had no idea about Mexican Independence, or who Ignacio Zaragoza was. (In case you missed that day in world history class, he’s the general in the Mexican army who defeated invading French forces at the Battle of Puebla on May 5, 1862.)

To a person, everyone I asked, missed the context of the entire meaning of May 5.

So what does this have to do with Bible Study? I observed the calamity of contextual chaos.  Context is also key in Bible study. It’s easy for us to be drawn to a single verse and misconstrue its purpose and meaning because we fail to understand the context of the verse.

“I can do all things through Christ who gives me strength.”

If you’re knee-deep into church culture you have heard it in songs, cheers, sermons and in pregame interviews of famous Christian athletes.

It’s often referred to in contemporary circles like this: I can solve this problem, score this touchdown, win that award, or marry that girl. But often, the person referring to the verse forgets the voice of the writer.

Paul was in prison. In earthly terms, like girls, football, acclaim, financial success, Paul would seem like a loser. Paul is writing a letter from prison about being able to endure not achieve. He’s enduring a loss of freedom, loneliness, uncertainty and pain. Speaking in modern terms, this is not a Mary Poppins kind of verse. It’s a Martin Luther King Jr. kind of verse.

“‘For I know the plans I have for you,’ declares the Lord, ‘plans to prosper you and not to harm you, plans to give you hope and a future’”

This is another “coffee cup” verse that falls victim to misuse by way of context.

Our inclination as believers is to make this verse personal when, in fact, it was written prophetically to a nation, not an individual. We also find out that the promise has a 70 YEAR expiration date. This plan wasn’t even for the generation reading it.

How do you get to a true, inspired understanding to the meaning of scripture? Context, Context, CONTEXT.

Let’s keep in mind context as we prepare, teach, and discover the real mystery and power of God’s word. And be particularly watchful for pedestrians when you’re driving tonight. They’re celebrating something – they’re just not sure what it is.