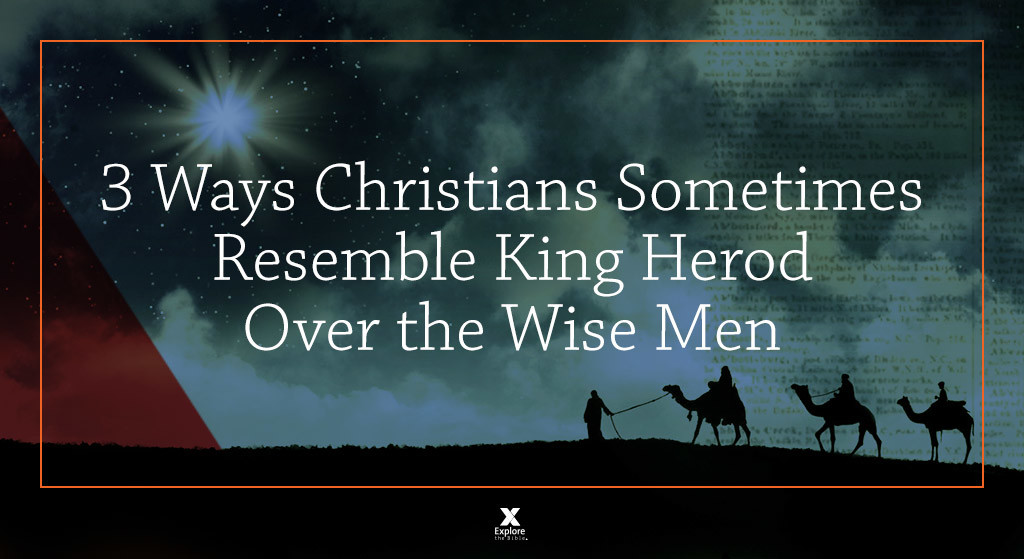 They may not have been believers. They may have numbered way beyond the traditional 3. They may have been Persian mystics, but they saw the same thing that Herod’s advisers saw. They saw reason to believe that Jesus is Lord and came to investigate. In the end, they would worship Jesus. They were the wise men. Their response to Jesus’ birth, when juxtaposed with Herod’s response, provides an interesting contrast. In honest introspection, consider ways in which you may sometimes resemble Herod more than the worshiping wise men. Here are three ways Christians might resemble Herod:

1. We don’t want to surrender the throne to Jesus.

Jesus is Lord and Christians know this. So, why do we, like Herod, try to keep Him off the throne of certain aspects of our lives? If there is something in our hearts that we struggle to give over to Him, then we are acting like He is not Lord – a dangerous proposition. Herod the Great was appointed to his throne by the Romans who had used military force to exert their influence over Judah. He was an Edomite who had no business ruling over Jewish people, but Jesus was King from His very birth. We can seethe with anger at Herod, but then refuse to surrender our finances to God. We may try to hoard aspects of our lives from God. We may refuse to trade our vacation plans for a mission trip to which He is clearly calling, or hold fast to something He is clearly asking of us. Is He not Lord?

That which you would try to keep from Jesus is actually lord in your life. Don’t pull a Herod. Jesus truly has been born King, so instead of trying to usurp Him in certain areas of your life, bow down like the wise men. Take the crown from your head and place it where it belongs; at the feet of Jesus. Like the wise men, bring Him an offering. Surrender the throne of your heart to Him.

2. We find our efforts thwarted because they are counter to His will.

Now, it is not likely that you have ordered the mass slaughter of all the young boys in a given town, but this may be one way in which you can see your reflection in Herod. Herod’s terrible plans failed because God knew best, because Herod was sinning, and because God is sovereign. Have you ever planned something thoroughly only to see it fall apart? Have you experienced repeated inexplicable failure at something? Have you considered that God may be thwarting your plans because you are working against His will? God answers prayers that align with His will and He sometimes halts the plans that go against it. Job 5:12 reveals that God, “frustrates the schemes of the crafty so that they achieve no success.” Imagine Herod’s overwhelming frustration and be honest with yourself as to why you might be able to relate to it.

When Herod’s advisers found that Micah’s prophecies foretold the Messiah’s birth in the Bethlehem (there were two) that was just four miles from Jerusalem and effectively right under Herod’s nose, he sought a second audience with the wise men and pretended to be a believer! Matthew 2:7-8 reads, “Then Herod secretly summoned the wise men and asked them the exact time the star appeared. He sent them to Bethlehem and said, ‘Go and search carefully for the child. When you find Him, report back to me so that I too can go and worship Him.'” What a fake!

Fortunately, God advised the wise men through a dream to return home through another route (Matt. 2:12) and an angel told Joseph to flee to Egypt both to protect Jesus and to fulfill prophecy (Matt. 2:13-15). Herod was crafty. He put on a show. He said the right words. He was even, like many in our churches today, confronted with beautiful textual proof that Jesus was the Messiah and instead of responding by making Jesus Lord in his life, he sought to suppress the truth – taking the most drastic measures possible.

Pray for the “Herods” among your ranks who are faking it and repent vehemently when you see similar sin creeping into your own life. Like the wise men, with reverential awe, marvel at the way Jesus fulfilled Messianic prophecy as you worship Him this Christmas season.

Jesse Campbell is the brand manager for Explore the Bible.