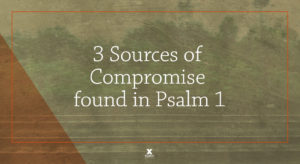 In Psalm 1:1, the psalmist identified three sources of compromise for the believer: walking in the advice or counsel of the wicked, standing in the path with sinners, and sitting in the company of mockers. This first source points to a compromise in worldview. Instead of looking at life through the lens of Scripture, the person looks at life though the lens of standards established by humanity. “The Bible says” is replaced with “Ted says” or some other group or individual.

The second compromise is walking with the majority, justifying their actions in the process. The person chooses not to take a stand for what is right but rather stands with the sinner. One would not know who is the righteous and who is the unrighteous since both are taking the same position. The cause may not be the issue as much as the reason and the motives behind that cause.

The third source involves becoming friends with those who openly reject God and His truth. If I want to improve as a cyclist, then I must ride with people who are more accomplished than I am. Whom one associates with does matter. If we want to live a life that reflects God’s character, then we must sit with those who are seeking to do the same. Our source of truth, the causes we choose to support (and why), and the company we keep all become sources of either compromise or righteousness.

From the Bible Skill for this session: What does Psalm 1:1 teach about a process of compromise? In what ways does Samson’s life serve as an illustration of the truths found in Psalm 1?