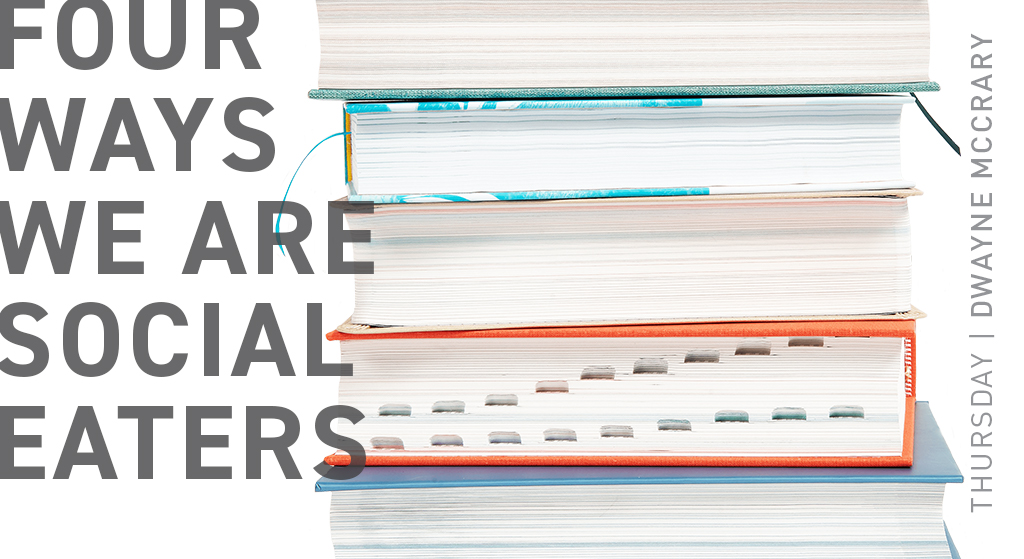 Sheep experts have discovered that sheep will adopt other animals in their attempt to create community. Horses, dogs, cows, and even humans can become the “herd” for a sheep. If his or her “herd” are present, that sheep will willingly eat. Remove the opportunity for social eating and most sheep will either break out of the pen searching for a friend or die from starvation. Sheep are strange that way, they want to eat but rarely do so alone.

Are these same things true for us when it comes to our spiritual health? We know that we are created to be social creatures. We may debate some of the finer points about what it means to be created in the image of God, but being relational would not be one of those points. Even during the guarantees associated with COVID, we have found a way to socialize. My wife met a couple of ladies at a local drive-in restaurant and they spoke to each other using their phones while sitting in their cars side-by-side. We will find a way to relate.

This relational quality mirrors the relationship seen in the Trinity. The Father, Son, and Holy Spirit are three yet one all at the same time. In His prayers the night of His betrayal (John 17:20-23), Jesus asked that His followers have the same type of unity found between He and the Father. This prayer assumes that we are capable of this type of relationship. If anyone would know about our capabilities, it would be the One who created us. We should view this as a challenge to mirror the relationship seen within the Trinity.

In what ways are we spiritually social eaters?

Way One: We explain to each other.

In Nehemiah 9, we are told that all the people who had returned to Jerusalem gathered at the city square to hear the Book of the Law read. This meeting was initiated by the people; they invited Ezra to be a part of their gathering. A group of Levites assisted Ezra, reading the book, translating it, and explaining what it meant (Neh. 9:7-8). The Levites were talking to a group of people who had lived in Babylon for 70 years. Some no doubt had taken on the Babylonian language and needed the Hebrew translated for them. But these Levites went beyond that and explained it as well.

We too need times when a Bible passage is explained to us. We need an opportunity to hear and dialogue about what is being said so we can process that for ourselves. The beauty of asking questions and sharing our own thoughts with a group is that it opens the door for others to process and help us sharpen our thoughts and understanding as well. God uses these interactions to shape, confirm or redirect, and challenge our thoughts.

Way Two: We listen to each other.

In Acts 15, we find the account of what became known as the Jerusalem Council. Some believed adherence to the Jewish practices and ritual, especially circumcision for males was required before a person could become a follower of Jesus. We are told there was a great deal of discussion until Peter addressed the group followed by Barnabas and Paul. Certainly the people present knew the teachings of Jesus and His acceptance of Gentiles prior to His death, yet they still debated. In part, everyone needed to come to agreement and allowing people with opposing views to share helped that to happen. But this also gave Peter, Barnabas, and Paul insight into what and how others were thinking. They could then anticipate what they might hear outside that room and could prepare a clear response that reflected Jesus’ teaching. Imagine the value of hearing the debate for the men who would carry the letter written by James to the churches explaining the decision. They could anticipate questions and prepare to address those questions in a reasoned way.

For us as believers, sharing with others our beliefs and why we believe that is important. Remember the people at the Jerusalem Council were believers and they came from similar backgrounds yet not all believed the same thing going into the gathering. By listening to other believers, we also consider why we believe what we believe and how to effectively articulate that belief. That sharpens our understanding and gives us an opportunity to enter into dialogue with other believers.

Way Three: We encourage each other.

Sheep are followers and they learn to be followers at an early age. They can be in a flock enjoying their grass and then be moving quickly if one of the other sheep in the flock decides to relocate. They cause each other to move as a group. The moving can be for their good or for their bad. Their willingness to follow is one reason sheep were one of the earliest of animals to be domesticated.

In Hebrews 10:24, we are encouraged to “provoke love and good works” (CSB and KJV). A comparison of translations helps us better understand the word translated “provoke.” Others translate this Greek word as motive (NLT), stir up (ESV), spur (NIV), encourage (NASB), and stimulate (NASB95). This is a rich word here that carries an intentional and aggressive action. This same word is found in Acts 15:39 where we are told some were stirring up disagreement. The verse that follows called for the readers of Hebrews to assemble and to do so for encouraging each other. This provoking is a group activity.

Way Four: We protect each other.

The only protection sheep have from predators is the group. Some species of sheep have horns, but that still leaves them vulnerable to attacks from the side and behind. A sheep’s only hope is to remain with a group. Predators tend to focus on that one sheep that is separated from the herd which is one reason the shepherd could leave the 99 in search of the one that was lost (Luke 15:4). The 99 were not in danger since they had each other.

As believers, we have the assurance of salvation, the sealing of the Spirit, the Bible, and the armor of God to protect us. But here is the catch, we have these as a group. When we look at Ephesians 6 and the putting on of the armor of God, the group is being addressed. The Greek verb translated “put on” was plural, as is the “you” that proceeds “stand” in Ephesians 6:11. Paul was instructing them to wear this together. We stand at the ready against Satan’s attacks together. Paul defined the value of being with other believers when he directed Timothy to flee from temptation and do so with others who desire to have a pure heart (2 Tim. 2:22). It was about protecting each other’s hearts.

What are some ramifications for us today?

If we are a church leader, we need to help others find a group. We also need to make sure the groups under our watch are places where people can dialogue and talk through their beliefs with others. That means we need to help teachers be more than a presenter. This also means we may need to set a size limit on our groups and start more when we see a group getting close to whatever number that is. This also means we need to be in a group. We need it just as much as anyone else. I know the pressure and energy needed to lead a worship time, but we don’t excuse our Bible study leaders from worship and it takes as much energy to do what they do every week. Our being in a group signals to everyone else that groups are important, especially since we are social eaters when it comes to our spiritual diet.

Just like we need to be in a group, we also need some alone time to process what we ate. More on that next week.

This is part three of a four part set. Read the first post. Read the second post.